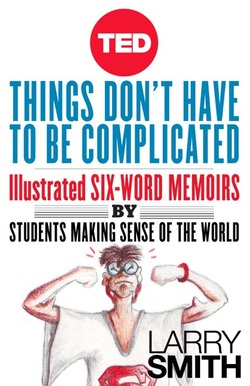 "In 2006, Larry Smith presented a challenge to his community at SMITH Magazine: How would you tell your life’s story if you could only use six words? The question, inspired by the legend that Hemingway was once challenged to write an entire novel in just six words. The small experiment soon became a global phenomenon, producing a series of books and inspiring millions of people to think about their own existence and how it might best be expressed if they could only do it with six words. The latest addition to the series, Things Don’t Have To Be Complicated: Illustrated Six-Word Memoirs by Students Making Sense of the World, comes from TEDBooks and collects dozens of visual six-word autobiographies from students between the ages of 8 and 35."


Two of the 8th grade Meisler students had their Six-Word Memoirs published in this book!
The 7th and 8th grade Talented art students wrote their own six-word memoirs and used the art media of their own choice to illustrate. After either painting, drawing or collaging their work they photographed it using the IPad and added their six words to it with either Wordfoto or Typedrawing .